Those opposing the retention of veteran Tennessee Supreme Court justices Gary Wade, Connie Clark, and Sharon Lee are being urged to ignore the three justices’ vast judicial experience – they have served collectively for almost six decades — and consider instead the Court’s capital punishment experience.   In television commercials, PowerPoint presentations, and campaign materials, the justices are being labeled as “soft on crime” and soft, in particular, on capital punishment.

The opposition to the justices is led by Lt. Governor Ron Ramsey, who at times has admitted candidly that his objective is to “get[] the Republicans in.” But because appellate judges stand for nonpartisan retention in Tennessee, Ramsey has commandeered hot-button political issues to try to provoke the public. A portion of the campaign presentation his office created to share with business leaders and moneyed interests is entitled “Tennessee Death Penalty (or lack thereof.)” It implies that Tennessee is not executing quickly enough and that the Tennessee Supreme Court is to blame. 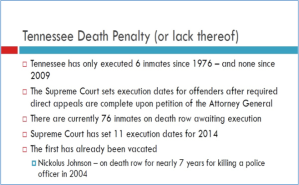 Although this type of Machiavellian rhetoric is neither new nor imaginative, its effects are nonetheless tragic. Since the famous Willie Horton ad aired in 1988, politicians have used the soft-on-crime tactic frequently to frighten, mislead, and manipulate the voting public.   Ramsey’s campaign to oust Justices Wade, Clark, and Lee does all three. It frightens the public by implying that in two cases, individuals who had been sentenced to death were “let . . . out [and were] back in [] society.” It misleads the public by suggesting that ouster of the justices will speed up executions in Tennessee. It manipulates the public into regarding their vote as a referendum on capital punishment.

The decision whether a state can and should kill one of its citizens is exceptionally complex. It is affected by legislative acts and judicial decisions, both state and federal; by executive orders and prerogatives; and by professional and public opinion. Suggesting to the voting public that this complexity can be distilled into a simple “for”- or- “against” proposition perpetuates and exacerbates a lack of understanding about the administration of capital punishment law.

Thus, perhaps, even more tragic than the effect on the electorate is the systemic effect on the institution of justice. In response to Ramsey’s campaign, supporters of the sitting justices have touted the court’s death penalty record, advertising that twice as many executions have occurred during the current court’s term as during the previous four decades and emphasizing that the justices have upheld convictions in twenty of twenty-one capital cases. While setting the record straight is important and understandable, judicial campaigns that underscore the number of affirmances in criminal cases, in effect, yield to the opponents’ distasteful and misleading tactics and accede to the notion that accomplishing justice in a capital case is a simple “for”-or-“against” proposition.

Of equal concern is the potential effect that the opponents’ campaign and the supporters’ reactions will have on other judges. In 1996, when I became the only Tennessee appellate judge to lose a retention race, (I hope to retain that distinction, not because of my desire to remain unique but because it will mean that our justices are retained), those who commented on the consequences of my loss predicted a more wide-spread ripple effect. Headlines across the state proclaimed that “Judges Face a Future of Uncertainty,” that “Judges Got a Message,” and that “Ouster Seen as Sign of Clout.” 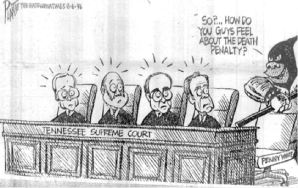 Others were more direct in their prognosis. Then-Governor Don Sunquidst famously commented that judges should “look over their shoulders to the next election” in deciding how to rule. Scholars who study Tennessee’s trial and appellate courts argue that judges did indeed look over their shoulders, toughening up following the 1996 election. As one group put it, judges had begun “killing for votes.”

If Tennessee’s judges allow the campaign against the justices to intimidate them or influence their decisions, Ramsey’s campaign to “get [] the Republicans in” could potentially cast the rule of law out.  Our system of justice is based on the principle that law, not power, should govern; that courts must act independent of political influence; and that judges must rule with neither fear nor favor. As U.S. Supreme Court Justice Stevens observed, “It is confidence in the men and women who administer the judicial system that is the true backbone of the rule of law.”   At the end of the day, the quality of justice in the state of Tennessee will depend first and foremost on the willingness of Tennessee’s judges to remain resolute in their dedication to the rule of law in even the most difficult of capital cases.

Penny White is the Director of the Center for Advocacy and Dispute Resolution and the Elvin E. Overton Distinguished Professor of Law at the University of Tennessee College of Law.  Before beginning her teaching career, White served as a judge at every level of the court system in Tennessee, serving as the first female Circuit Judge in the First Judicial District and the second woman to serve on the Tennessee Court of Criminal Appeals and the Tennessee Supreme Court. White teaches and writes on topics related to evidence, criminal procedure, capital punishment, and ethics. She is a strong advocate for judicial independence and integrity and has written an article on the topic — “Relinquished Responsibilities” — which was published in Volume 123 of the Harvard Law Review. White is most proud of her authorship of the Tennessee Capital Case Handbook, a book for criminal defense lawyers who represent those facing the ultimate punishment.

In an Opinion piece entitled, “Politics has no place in Tennessee appellate courts,” Jim Edwards writes: